Buy  Runtz strain. Runtz strain is a hybrid strain first cultivated by the well-renowned Bay Area breeders of the Cookies Family. This strain definitely flaunts its genetic pedigree with a sweet aromatic. But the flavour profile as well as a strikingly colourful appearance. Being the progeny of exclusive boutique strains makes Runtz an extremely rare and sought-after strain.

As the Runtz strain has such a diverse number of phenotypes, it isn’t easy to distinguish. Whether it is more indica or sativa-leaning. And different phenotypes of this strain can lean either way. In some cases. Even with this being the case. One that produces a euphoric and elevating high that can last for hours,  tastes damn good while doing so.

Runtz Strain is a strain of cannabis fresh out of LA. With a terpene profile most would describe as candy. However, as a strain has an incredibly diverse number of phenotypes. Which can drastically effect its data. As such, it is almost impossible to say whether Runtz is a Sativa or Indica leaning hybrid. As different phenotypes end up leaning different ways.

Runtz is a popular strain amongst cannabis smokers big into the culture and the advertising behind the packaging of cannabis products. You might have put it together already, but the growers named the strain Runtz based on its sugary-sweet aromatic and flavor profile, in addition to the way the bud looks. If dried and cured correctly, users will be able to spot colors beyond green in the bud.

It is an incredibly hard strain to find, almost exclusively sold out of Los Angeles. Little to no information is available on Runtz on the internet.

Due to its rarity and the number of different phenotypes, the THC content of the Runtz strain can vary drastically. 29% THC is incredibly potent and will rock novice and experienced cannabis consumers alike. There is not much data for the average CBD levels of this strain.

These are the typical effects of many hybrid strains. Some of these effects may even have medical potential. Many users recommend this strain for anxiety and stress relief due to its mood-lifting effects. Pain relief is another reported benefit as this strain can help to manage mild aches and pains.

Use of The Strain

Some of the higher THC variations of this strain may induce feelings of paranoia in novice consumers and people predisposed to those feelings.

Upon consumption of this strain, stress and anxiety will melt away as the euphoria emerges. This euphoria is potent and will elevate your mood, but perhaps not enough to leave the house as the overwhelming relaxation sets in. It is during this time when bodily aches and pains disappear.

Accompanying this physical relaxation are some mind-expanding cognitive effects. These include increased energy and creativity, making this a popular strain for activities. Indoor activities are recommended over outdoor ones because once these cognitive effects wear off, you are left with a strong indica body stone. This will leave your muscles relaxed and your mind numb.

As mentioned earlier, the strain is incredibly elusive and, as such, is hard to find outside of California. Because of this exclusivity, this strain is quite expensive. You can expect to pay approximately $80 AUD for 1/8 oz of Runtz.

If this strain seemed appealing but too elusive, or just too expensive, then don’t worry. There are plenty of other fruity-tasting strains to try. Some of these include Purple Punch, Pineapple Express, Cherry Pie and Mango Kush. If all the fruitiness wasn’t for you, but you still have a sweet-tooth, then check out other indulgent strains such as Gelato or GSC.

While the Runtz strain is a rare beast, it is quickly rising in popularity.

The euphoric and relaxing effects are an added bonus for this dessert strain, as it’s all about enjoying the whole experience. Keep your eyes on this one. The way things are going, you might see a lot more of it.

Medical Benefits of The Strain.

Clearwater and Snaxland both do the strain justice — and stunk up my car for a couple of days — but Cookies’ cut is probably the closest to the original. All of them are going to cost around $60 an eighth, however. L’Eagle’s $35 version, although drier than I’d like, was the best value I’ve come across in Denver, sporting royal purple spots that give Grape Ape a run for its money.

Runtz is generally lighter and wispier than most Cookies cuts, with gangly calyxes covered in sharp, distinct trichomes that look like a tentacle.

Runtz’s aroma jumps out of the bottle and sticks to your clothes, which is rare for a fruitier strain, but speaks to its power. Although a candy-like scent with a little rubber and Durban Poison at the end is what I usually pick up, Runtz is popular enough nowadays to deviate.

It’s hard to maintain that candy-shop appeal from smell to smoke, but Runtz does a good enough job of it if grown correctly. Sugary hints with notes of berries, similar to Alien Rock Candy, are cut out by subtle hints of wet soil and pine, giving the flavor a little earthy balance to all that sweetness.

Considered a 50/50 high, Runtz’s effects generally start in my head and eyes, sparking an instant cerebral high that kills my peripheral vision and stress. Despite the tunnel vision, concentration and energy aren’t hard to come by for the first hour or two, and that plays nicely with the lack of stress. Physical relaxation and munchies are inevitable, though, so be prepared to crash.

Runtz Strain is a rare hybrid marijuana strain by Cookies. It’s made by crossing Zkittlez with Gelato and is loved for its incredibly fruity flavor profile that smells just like a bag of the sugary candy we all know and love. Because of the rising popularity of this strain, it’s no surprise Runtz was named Leafly Strain of the Year in 2020. Growers say this strain has resin-drenched buds that range in color from rich purple to lime green. Runtz is celebrated for its creamy smoke that is smooth and welcoming. This strain produces euphoric and uplifting effects that are known to be long-lasting. 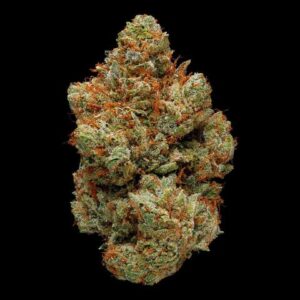