Pink Rozay lives up to its name, enticing its fortunate users with a medley of irresistibly delicious berry and earth aromas and offers its users an inviting profile of terpenes that’s as strong and cheerful as its high.

Pink Rozay is one rosé-flavoured strain that you’ll love to sip on all night. A heavy, indica-dominant blend of Lemonchello #10 and Lemon Pound Cake #75, Pink Rozay is a craft cannabis strain that’s as beautiful as it looks. A blend between ripe strawberries, earthy grapes slight nuttiness, this strain’s olive-green, pink and purple nugs will excite and delight your senses.

Pink Rozay lives up to its name, enticing its fortunate users with a medley of irresistibly delicious berry and earth aromas. You’re going to want to breathe deeply as you pull apart these green, pink and purple nugs because your nose will be hit by a berry patch of fruity aromas. Sweet but not overpoweringly so, this is probably one of the best rosés you’ll smell in your life.

If its aroma wasn’t enough, Pink Rozay offers its users an inviting profile of terpenes that’s as strong and cheerful as its high. On the first inhale, you’ll taste the inspiration for this craft cannabis strain’s name right away – ripe strawberries, rich grapes and a toasted nuttiness that’ll rival that of any other wine on the market. On the exhale, these delicate flavours intertwine with one another to leave a sweet and pungent aftertaste that’ll linger on your tongue.

Galileo once said that “wine is sunlight, held together by water.” If this was true, then Pink Rozay is “dank delight, held together by chunky nugs.” While not nearly as poetic, Pink Rozay’s nugs are literally chunky and dank. This strain sets itself apart from the others with its pink and purple highlights hiding just underneath the surface. Once you break open the nugs, you’ll be greeted with its incredible smell and a beautiful display!

As an indica-dominant strain, you’ll expect Pink Rozay to sedate its users, but the opposite is true. While this strain does provide a nice relaxing body buzz, it’s not to the point where you’ll feel sedated. In reality, these effects leave you feeling relaxed and content while fully awake!

As soon as you start to smoke this strain, you’ll feel these bodily effects settle in. At the same time, you’ll also feel a light head high take hold. You’ll feel light, euphoric and in absolute bliss. These effects make this strain a good fit for those suffering from depression, fatigue and stress. Just one sip is all it’ll take!

Be the first to review “Pink Rozay” Cancel reply 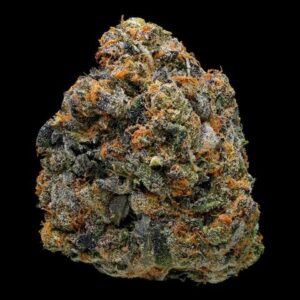